JUSTiFIED are a West Yorkshire based three piece outfit of guitar/vocals, bass and drums, although with their many contacts there may at times be guests on other instruments. 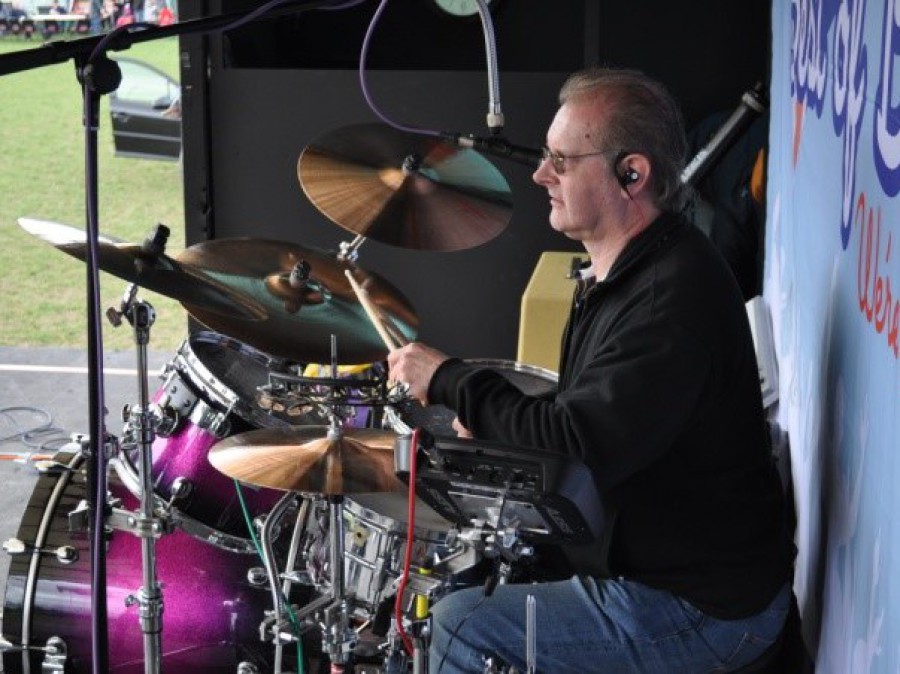 Martin has long experience playing drums in bands and for other acts, in clubs, pubs and major venues.

Some of the bands include The Strays (later called Man Canon) in the heavy rock era with the infamous Mo Pickles, Bronze (a 4 piece club outfit), Glass Eye (another 4 piece rock / blues band),

Pete Mitchell-Smith and the Blues Crew, Travis (no, not the well known one, but another Travis with Graeme Travis, superb keyboard player), Incognito (pop band playing clubs) and, in recent years, The Scratch Band and Old Gold.

Several stints playing for clubland acts in 80’s and 90’s was ideal training in the disciplines necessary for musical interpretation.

Martin was actually in a band called Throb Association for a short time with Pete, Justified’s Bass player, going way back in time. He likes most types of music including jazz, rock, blues, modern country and good pop music. Having played all of these over the years he has borrowed from these styles for the music of Justified.

Brian Downey, Thin Lizzy's drummer is regarded by Martin as one of the best rock drummers of all time along with Ian Paice and John Bonham.

One of Martin’s greatest memories is having met ‘Buddy Rich’, (without doubt, the greatest drummer who ever lived), twice and seeing him play several times before Buddy’s unfortunate death in 1987. Another memory is having recorded (with Travis) in a session supervised by Bobby Elliot (from the Hollies), without doubt one of the best British drummers from the 60’s.

Nowadays, Martin plays a Mapex Saturn kit with Ludwig snare drums plus Paiste 2002 and Paiste Signature Cymbals. Also a specially renovated and re-built kit will appear in the near future as soon as it is ready for use. 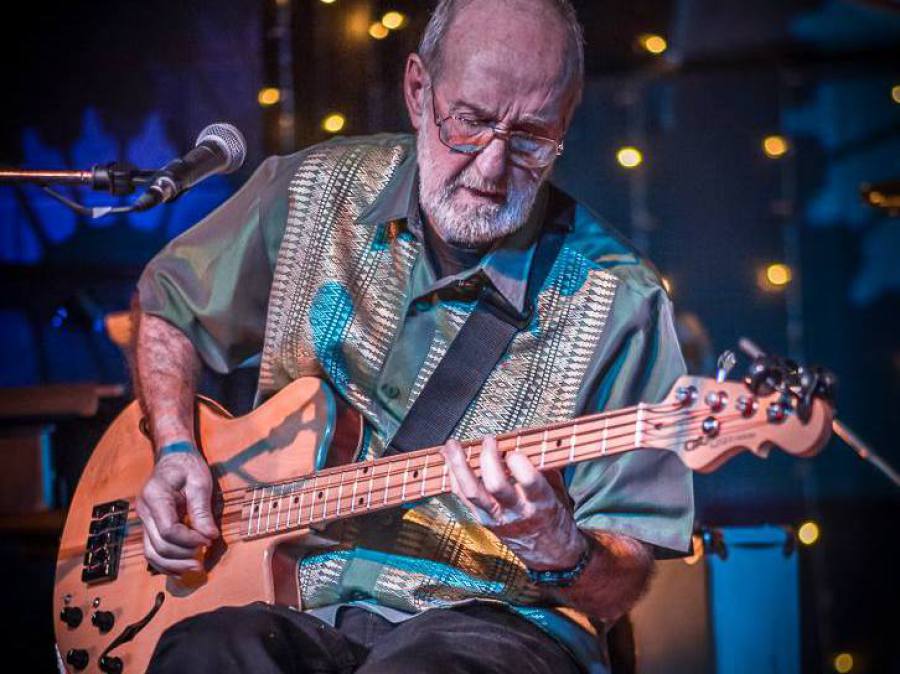 Pete started his musical career in the 50's, playing a tea chest bass in a skiffle group, graduating to playing early rock ’n roll on a double bass. Switching to bass guitar, he played the Midlands rock circuit during the 50's - supporting artists as varied as Gene Vincent and Screaming Lord Sutch.

In the early 60's Pete put aside his bass and, buying a Levin dreadnought, moved north to Bretton Hall Arts College where he concentrated on playing jazz and blues on guitar and banjo. He played in the college jazz band and other loose blues and folk groups. At Bretton he met Mike Levon who went on to form Holyground Records.

After college, Pete joined soul-blues band Throb, as well as playing bass and guitar on some Holyground Tracks.

In the late 60's Pete took the hippy trail to India and Thailand. Following his return to the UK, broke, he realised that bass players were in demand and started working in a cabaret / show band - The Kalahari Bushmen. This ended when his day job took him to Egypt where he formed a rock band - Khawaga, this time playing guitar.

Needing 'to spend more time with his family', Pete played only occasional gigs in the 80's. More significantly he linked up again with Holyground Records and spent many hours writing, playing (bass, guitar and keys) and recording songs with Mike Levon and Chris Coombs. One result was "& Strangeness and Charm" an album of prog / psych rock. A 3/4 completed album was abandoned when Mike died.

Pete also played bass for Bessie's Blues, led by Shiela McMahon, a trio celebrating the Ladies of Blues.They have recently released an album "Starting Out."

In addition to playing, Pete also engineers and produces recordings, recently completing two blues albums. Tracks he has recorded have been played on local radio and the BBC. 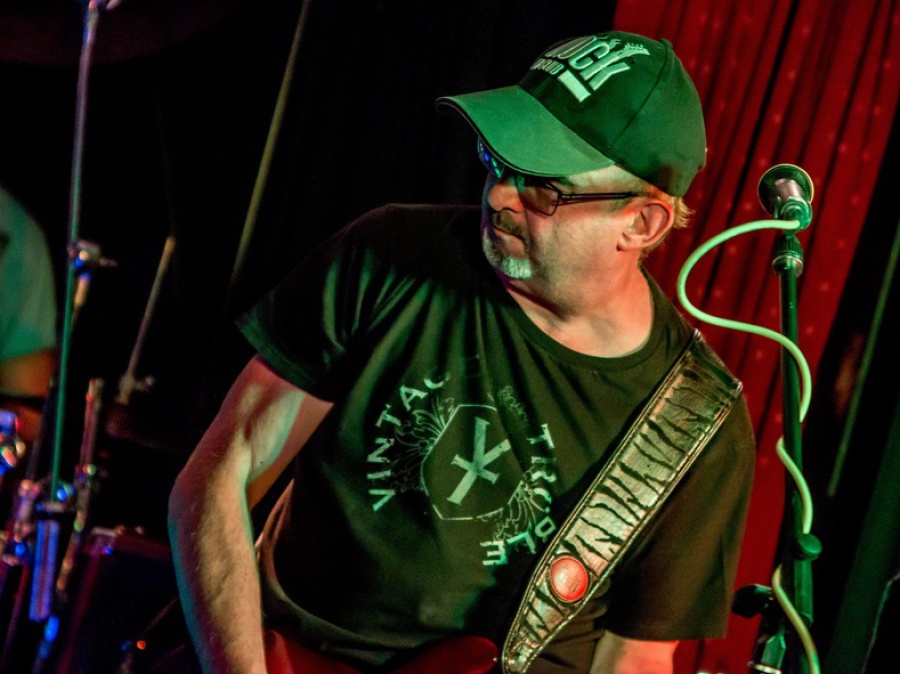 Born in the North East, Rod's love of music was nurtured in an environment where Chris Rea strummed guitar is his dad's local cafe, Jimmy Nail chatted to him in a local pub and Jim Moir AKA Vic Reeves was wont to "scaling" the pub floor. Not all at the same time but you get the picture..

Rod was head hunted by local band Eade, most notable for the drummer Graham Eade sleeping in for an audition with Hawkwind. Bassist Phil Phil Brown went on to join London band The Records. Rod went on to form "Downtrodden Codger and the Hangovers" with Karl Altdorfer on bass and Andy Webb on drums. Rod also organised a concert in South Park, Darlington and reviewed record releases on Radio Tees with DJ Roger Lewis, who went on to Radio 1 and Welsh Rugby fame.

Rod's band went on to support Marillion, and White Spirit, from which guitarist Janick Gers went on to play with Gillan and Iron Maiden.

Moving to Yorkshire, Rod formed "Dr Blue" with bass player Dave Elcoate and various drummers including Mick Dixon and ultimately Martin Larner. The band were joined by Ryan Mitchell-Smith on harmonica, and went on to play at many Blues Festivals such as The Peaks Booze & Blues Festival, Bradford Mela, Clarence Park, Burnley Blues Festival and the main Pendle Leisure Centre stage at Colne.

Dr Blue have gigged extensively over the last 18 years in venues such as The New Roscoe, Leeds, The Blues Bar, Harrogate and numerous others across the North. They also supported Slade, Wishbone Ash, Carvin Jones, Lester Hunt (Climax Blues Band) and...Darius! As a side project they formed their alter ego, the highly successful ZZ Top tribute band ZZ Eliminator, playing major venues such as The Limelight Club, Crewe, Sheffield Boardwalk and festivals such as Beaulieu Motor Show, Munters of Rock and Festada Cerveja (Portugal).

Dr Blue then took a different direction and evolved into Dr Rock, playing classic rock to please a wider audience, and are still gigging extensively.

Justified is a new side project for Rod to return to his roots and play blues blended with Americana, Country Rock and Jazz. Watch out for his famed slideless slide guitar playing!